on May 09, 2022 0 comments
Thanks for sharing
Original author from:Usman Pirzada
The original link of the article:https://wccftech.com/review/lg-hu715qw-4k-ust-projector-review-4k-laser-engine-with-the-clarity-of-a-long-throw/

More than two years ago, we reviewed LG's HU85LA triple laser 4K UST projector and were very impressed. When LG told us it had managed to cut the price tag in half, ditch 2 of the laser engines, and created a final product that would have a better-looking image and it didn't even have a focus ring - our interest was definitely piqued. Introducing the LG HU715QW, which is a single-laser-based DLP laser 4K UST projector from LG that defies all odds (and expectations) and promises to punch far above its weight class. It boasts a maximum lumen count of 2500, a laser capable of lasting 20,000 in bright mode (or 30,000 in eco-mode), and a price tag of $2999. With its older brother, we had noted that this is clearly not a mainstream product (at $5999) but with the LG HU715QW, LG has finally moved into mainstream pricing (when compared to TVs of similar sizes) and created a product that an average consumer could seriously think of buying.

The LG HU715QW gets full HDMI 2.1 support and HDMI 2.0 support with eARC (7.1 channel, 24-bit, 48 KHz, Atmos: Pass-through). The projector supports 12 bit color on YCBCR 4:2:2 (the native format for Blu-rays and most television content) and 10 bit color for RGB 4:4:4. It features a perfectly reasonable DCI P3 85% color gamut (this number is smaller than the LG HU85LA but is easily eclipsed by the other improvements present in this projector) and features an impressive native ANSI contrast ratio thanks to its laser engine. All in all, it punches far above its weight class based on the on-paper specifications so let's see how it performs in real life. While most DLP projectors (the vast majority of projectors in the mainstream segment) have a light source that lasts, at most, 4000 hours, LG is using a laser light source that will last for at least 20,000 hours (or up to 30,000 hours in eco-mode). Now let's talk about major technical changes from the HU85LA. LG has gone back to traditional DLP design with this particular variant - and in a way that is extremely impressive. With the triple laser design, we had a 100% color lumens and a great color gamut but clarity suffered. The original unit also did not have advanced laser dimming support like the HU715QW does. On the back side of the LG HU715QW we have 2x USB slots, 1x HDMI 2.1 slot and 2x HDMI 2.0 slots (out of which one has eARC enabled), an Optical Out and an Ethernet port. There is no tuning support with this model. 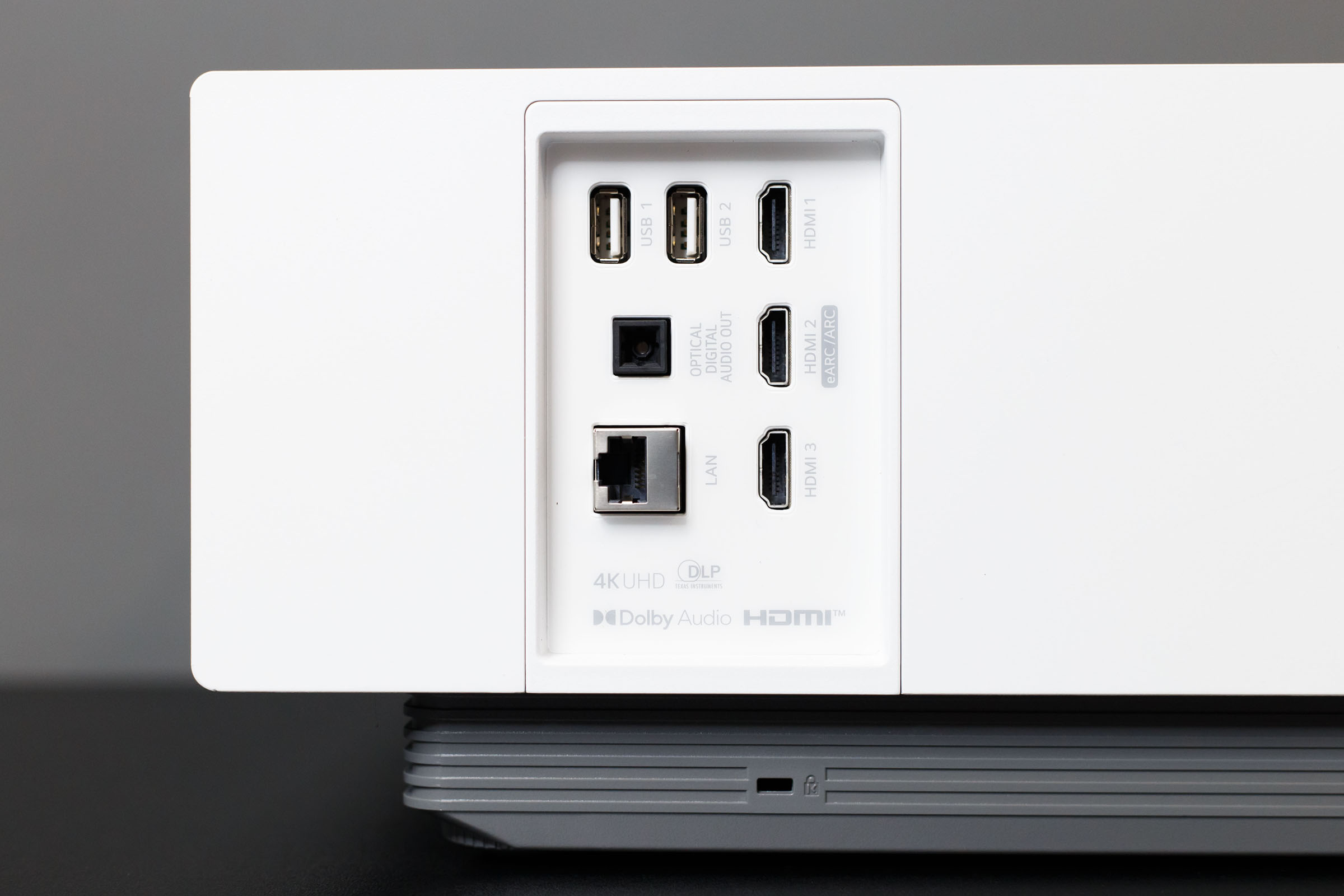 Let's talk a bit about the layout of the LGHU715QW. It uses a blue laser system (presumably from NICHIA Corp) and the blue laser is passed through a phosphor wheel to create Yellow, Green and Blue channels which are then passed through an 8-segment color wheel with RGBYRGBY tracks. 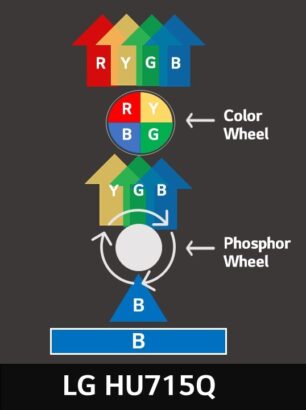 You can easily hear the color wheel spooling up when the projector starts for a few seconds before it reaches its constant speed (7200 RPM) and the color wheel design has extremely low levels of RBE (although users are highly sensitive to RBE in DLP projectors may see it).

The result? We can see from the diagram on the right that the Red channel is the one that will suffer the most in this arrangement - but we will get incredibly vivid blues and very decent greens and yellows. This also explains why the projector has a relatively lower color space of 85% DCI-P3 (which is perfectly usable considering most TV content is mastered on Rec. 709).

The projector is powered by a Texas Instruments 0.47" DMD XPR chip. For the uninitiated, the XPR chip is able to offer true 4k resolution with the true resolving power of 4k pixel grids or 8.3 million pixels on-screen. This is different from PRO-UHD/4k-enhanced variants of XPR which cannot project a true 4K image (only up to 4.15 million pixels - which is half the required resolution for 4k). It sort of works like how CRTs of old used to function (with progressive lines being scanned on the monitor and your brain making them into a single image). Just so I am absolutely clear about this, this is real 4K, unlike 4K enhanced/PRO-UHD projectors which project a sharpened 1440p native image without actually projecting 2160p pixels. 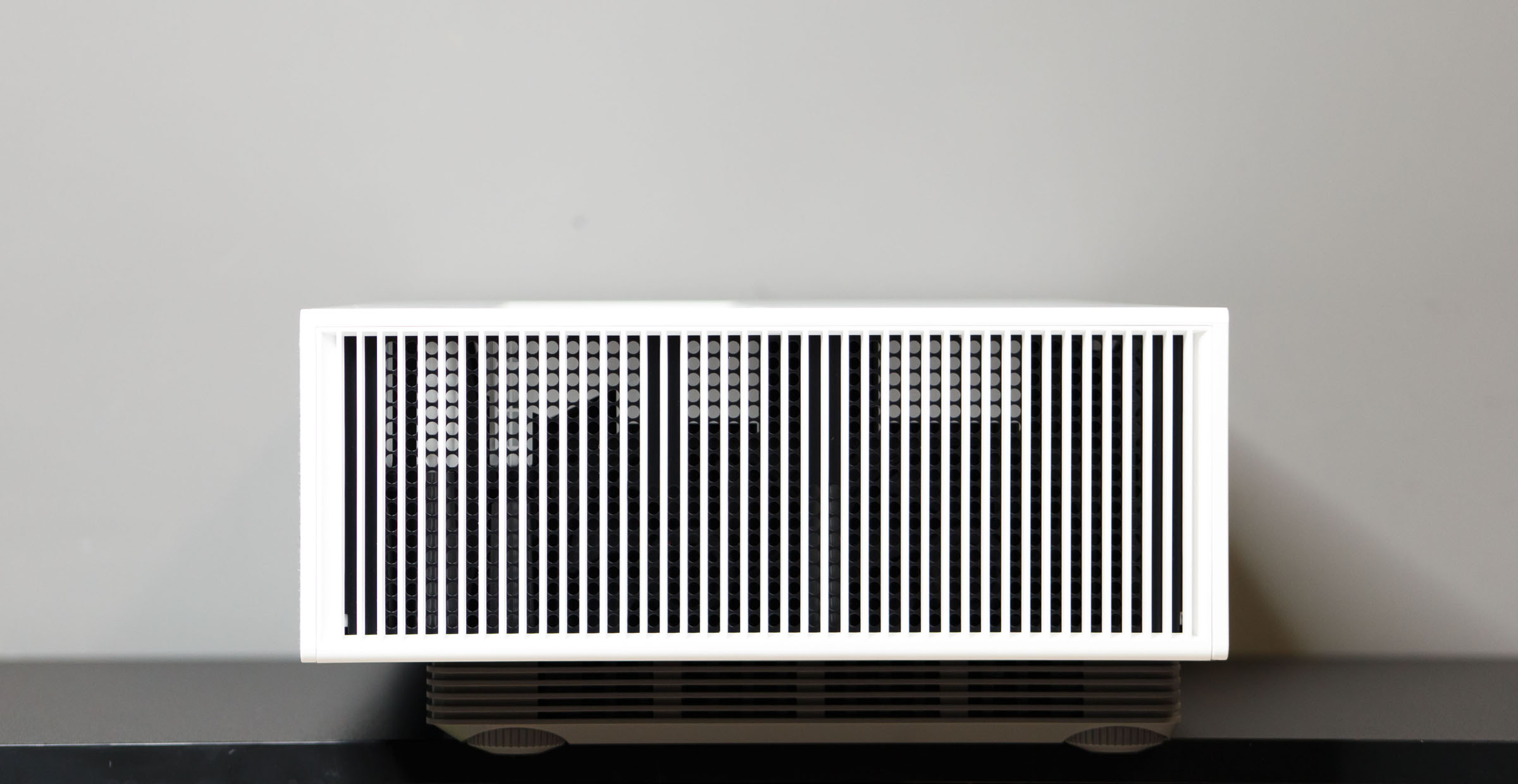 LG appears to have significantly improved the light border situation with this model. We are seeing minimal light border on the sides and we can already tell that this will significantly improve black performance. The company has reduced the size of the ultra-short-throw lens assembly although the quality of the projection casing appears to be clearer and uses a better quality glass. It also boasts a light sensor to dynamically adjust the light output based on ambient light - although we preferred to keep that setting turned off in our testing. The adaptive contrast is great and very rarely made mistakes when judging the scene.

In fact, with all "dynamic" features turned on, the LG HU715QW is capable of achieving a dynamic FOFO contrast ratio of 2 million to 1. The same tech applied to HDR turns into dynamic tone mapping where every frame is analyzed for optimal light output. Frame by frame analysis is a feature that is usually not present in projectors in this price range and reserved for expensive projectors like the JVC NX5 or NX7 (which are more than twice the cost of the LG).

The LG HU715QW is not factory calibrated but we were pleased to see that out-of-box calibration is quite good, however, you do have lackluster reds and a very strong blue cast in our test model. This, however, is easy to calibrate away with LG's fairly competent set of calibrating tools. We measured black levels at 0.12 lux - which are quite impressive for an ultra-short throw projector and probably the best we have ever seen in a UST setup. With the LG HU715QW, calibrating the projector to a natural yet cinematic-warm color tone resulted in a jaw-dropping image with levels of clarity we have frankly never seen before in an ultra-short throw projector. Our 100-inch screen was filled with razer sharp focus (a lot of UST projectors suffer from edge focus issues - which is another major problem LG improved upon).

In the past, we have seen that LG laser projectors tend to be at home with a Gamma setting of 1.9. Any higher and the shadow details start to get crushed. However, this requires external calibration from the source to bring the Gamma back down to 2.1. We are pleased to say that with the LG HU715QW, this is no longer a problem. The projector is comfortable running at BT.1886 and we could see almost no crushed blacks or blown-out highlights.

All testing was done on a motorized, electrically tensioned, Vividstorm 100-inch UST-ALR screen in a room with and without ambient light. 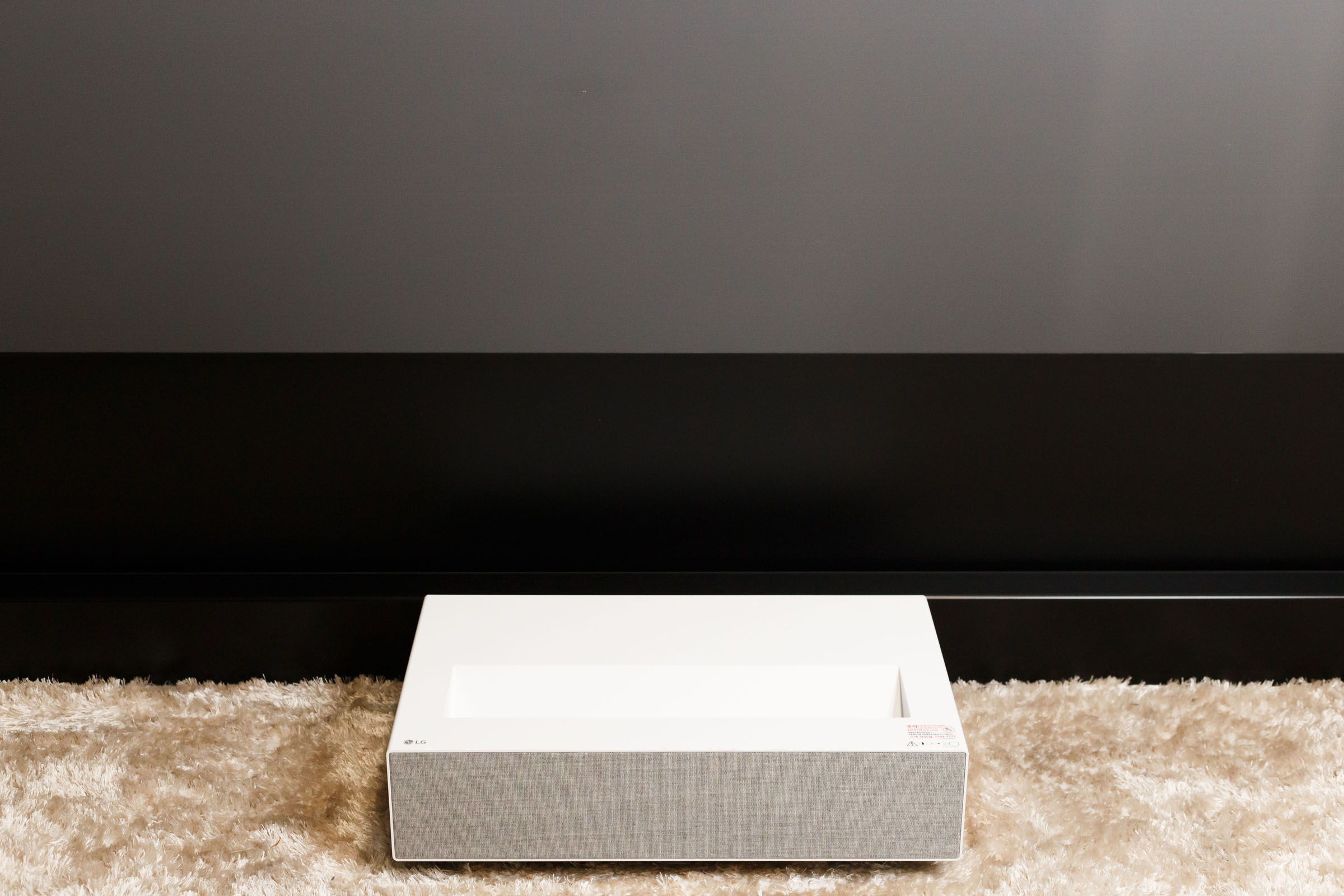 All tests were conducted with Vividstorm's UST-ALR 100 inch gain screen.

Let's start with the ambient light tests since most users that buy this will be comparing it to televisions. Keep in mind that a UST projector - even one equipped with an ambient light rejecting screen will never be able to keep up with TVs. This is why we always recommend adding thick curtains and minimizing ambient light even if you are rocking the ultimate ALR setup (which this definitely counts as). We tested the projector using a standardized ambient light of 99 to 105 lux - which is incredibly harsh for most long throw projectors and were blown away by the level of contrast. Apart from the blacks, which were obviously suffering in the harsh overhead light, everything else was spot on. This is definitely what we will consider a "useable" level of performance in ambient light. If you just want to catch the news or see a sports game with some buddies over, this little projector can handle a moderate bit of ambient light just fine. However, the projector shone when we switched to a completely light-controlled environment, and (post-calibration) the skin tones and highlights truly popped. Blacks were impeccable as well and you can see the virtually nonexistent screen border in this frame.

Here is the thing, even though HU715QW boasts 85% DCI P3, it has far better clarity than most ultra-short-throw projectors in its competition (we don't know of any metric to qualitatively measure this but perceptually -  we saw an almost doubling in perceived details at the 6-foot viewing range). Color separation - thanks to the color wheel, is exquisite. The only real weakness of this projector is the red channel (which can be calibrated away to be not much of an issue) and the input lag - which is fairly typical for this class of XPR-based projectors.  Every image and demo reel we ran showcased flawless color separation (once calibrated). Adaptive contrast and the color upgrade actually work great as well.

LG's incredible contrast and highlight performance are clearly visible in these images (straight from the camera with no additional post-processing) - although pictures clearly do not do them justice and images appear far brighter in real life. The image sample with the oxes is a good representation of the amount of brightness that your eyes actually see from this projector on a 100-inch image. LG continues its masterclass of continued technical innovation and keeps chipping away at the coveted value proposition. Combined with a UST-ALR gain screen, this affordable projector can easily project a 120-inch image (although 100-inch is ideal in our tests) and has one of the best HDR tone mappings we have seen. Post calibration, the picture is crisp, vivid, and easily one of the better quality images we have seen. We prefer to keep things on the saturated side (TV-like) without destroying any details and we were able to achieve just that. For the purists out there, there is a Filmmaker mode included as well that will maximise the color gamut. 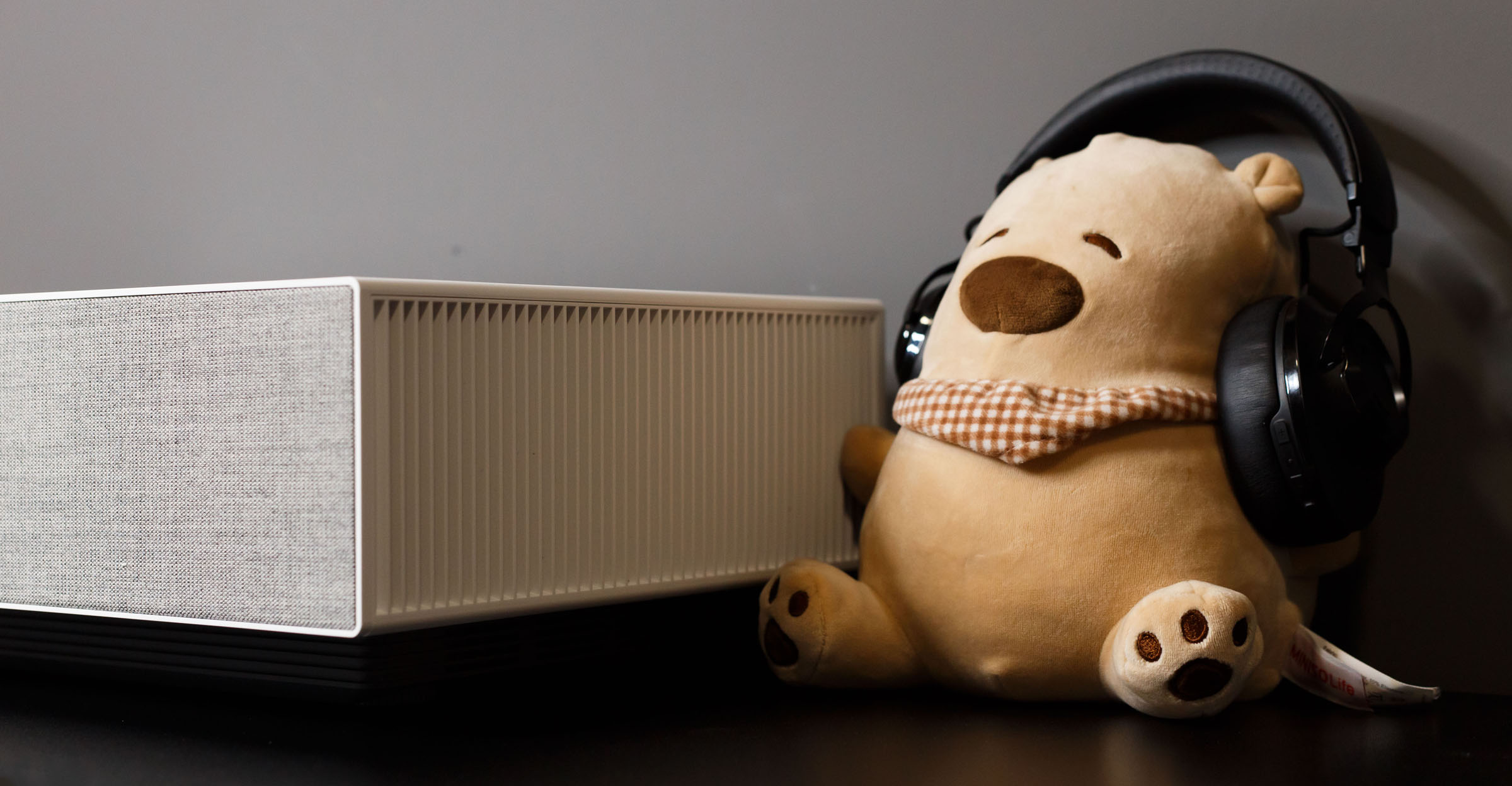 With a design aesthetic that will fit in any living space, a laser light source that will last for 20000 hours, and a price tag of just $2,999, we can safely recommend this to anyone that is in the 4K UST projector market in the $1000-3000 price range. It is easily better than its counterparts - Xiaomi, Vava, etc and based on our tests actually punches far above its weight class. While it doesn't quite achieve the same color gamut as far more expensive sony models (which cost $24,999), clarity-wise it is actually in the same league - which is very impressive considering the price tag. We don't know what black magic LG used to improve the glass assembly on this model - but it definitely worked! Because of this, we are happy to give them our Editor's Choice Award.